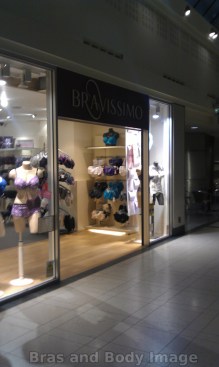 Today. I went to Manchester’s Bravissimo! For the first time. Slightly embarassingly… I was rather excited. What can I say, it’s not every day I get to try on bras made for my size!

Though the shop was a lot (a lot!) smaller than expected, there was still a great range on display, with more in stock on request.

Despite having no appointment, upon arrival both my sister and I were promptly directed upstairs for a fitting. There was comfy seating, posters explaining how a bra should fit and what a well-fitting bra can do – even the mannequins had been properly fitted!

Our names were taken and we sat down, until our fitters came and took us to separate dressing rooms. 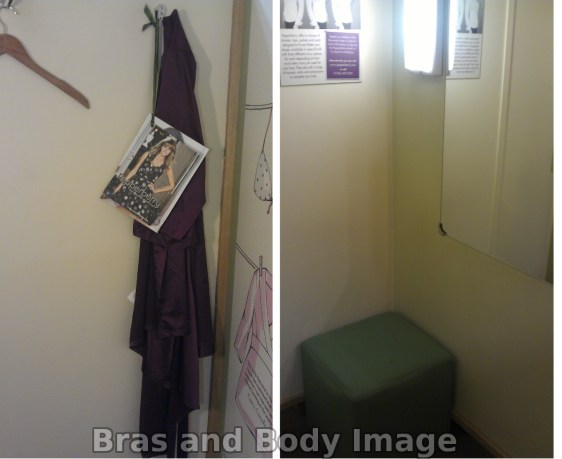 The dressing room was spacious with a lit full-length mirror, a seat, and a catalogue and silky robe hanging in the corner – although my phone camera seems to have sapped all the warmth from the room! I was fitted by eye from my 32J Freya Pollyanna to a 30JJ/K (down a band size, up 1-2 cupsizes). I’m sure I would normally be a 28JJ/K, but I am of course carrying a bit (alright, a lot) of christmas chub :p

I was brought a selection of bras in bright colours, rather than the same old black and white granny-esque I was offered at my last fitting – fantastic! My fitter was friendly and informative, reminding me about how a bra should fit, putting me at ease and adjusting and checking as necessary. She did offer to leave while I was changing, which I wasn’t worried about, and I at no point felt pressured into buying something that didn’t work for me. 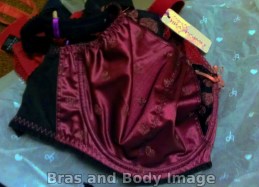 Of the bras I was given, I made a beeline straight for this one, and this was definitely the best of the bunch. Though it looks like a metallic girly pink in the site picture, I have to say in person it is gorgeous – more of a dark but vivid pink/purple. I’ve tried to correct the colours in the picture on the right, as it seems my camera really doesn’t like it! I’m not a huge fan of the hearts all over it, but I think when on they aren’t too noticeable, and look more like polka-dots – which I love. Under clothes it has a beautiful rounded and slimming shape, and though the fit isn’t 100% on (I have a very slight overspill and wrinkling at the bottom – apparently due to full-at-the-top breasts), I am in love with it.

I loved the little detail on the bow – long ribboned with tiny hearts on the ends. They’re sure to come off, but for now, they’re adorable. The one thing I expected to dislike was the lack of sheer panels – as is often done, this bra has “additional lining” in the upper panel for higher cupsizes. Whilst this usually annoys me as it can ruin the whole look of a bra (the Arabella, anyone?), I find myself actually preferring the sultry look of pink on black mesh, compared to the sheer version on the site.

The second bra I tried was the boysenberry Alana in a 30K, which costs £26.

This bra I wasn’t quite as keen on. From the front I thought it was gorgeous – great colour (very similar dark pinky purple as the Luxe, in fact, it’s pinker than in pictures), gorgeous semi-sheer panels…but pointy. After the gorgeous rounded shape I got from the Luxe, this was disappointing. Again, there was slight wrinkling at the bottom, but this was mostly fixed after more adjusting – definitely not enough to warrant going down a cup size. From what I gather the Alana runs small in the cup, and a 30K is more like a “standard” (if there is such a thing) 30JJ. I tried this on again when I got home with my BiuBiu summer city dress (which I must post about) over the top, and I think the pointiness issue is not as bad as I thought – it actually works quite well with the dress.

Though I didn’t fancy any of the bras left in the selection, I was asked if there were any other bras I wanted to try. Despite the legends of its pointiness, I asked to try on the Dotty Spot in both colours – 30JJ in the black/café (£29), and (I think) 30J in the aqua/red (£23 on sale now).

…Well, as you can see, it really is pointy. I don’t think these pictures quite capture just how pointy it is. As you may have also noticed, I only have pictures of the black. The black ran slightly large, but not unwearably so. On the other hand, the aqua, despite apparently being a 30J, was absolutely huge. I mean crumpled fabric, a huge empty space at the top…just huge. I was so disappointed! I adore the pattern of this bra! Both versions are beautiful, and from the front it is dazzling, but that profile…Well, I don’t think I can live with it. I do wonder now if she had in fact brought me a bigger size in the aqua, though I’m sure she said one was a J and the other a JJ. At any rate, unless I am receiving it as a gift or really going for the 50s look, I don’t think I can rationalise buying this! Apparently the shape does soften after a few wears, so that may be a glimmer of hope for me.

Only having an hour of parking (blasted expensive cities!), we couldn’t stay any longer to keep trying bras on – not to mention my 27 year old brother waiting outside :p So I settled on the Luxe and Alana, for a grand total of £60. Of course, I will have to hunt down something close to matching underwear myself, as £14 a pop is just a bit too steep!

At the check-out, our bras were lovingly wrapped in tissue paper and put in small bags, a fantastic touch. My sister left with two plunge bras and a confirmed size of 28H/HH, exactly what I put her as – if only I could have every day access to these bras to fit those around me! I feel now I really must shout the wonders of the Bravissimo fitting service, and I can’t stop recommending them – I just wish I knew who to suggest for those smaller-cupped women out of their size range.

I have since written more detailed reviews of the Dotty Spot, Alana and Luxe Heart on my Bratabase account.

5 thoughts on “A little late to the party…”