Lately, I’ve been reading a lot of comments in online communities where someone has bought a new bra after following a modern measuring guide, and they believe it doesn’t fit. Usually, there are complaints that the bra is too big in the cups and too small in the band. Quite a lot of the time, one of the main issues in seeing whether a bra fits is that it hasn’t been put on and adjusted properly. For this reason, I thought it would be useful to show how much of a difference you can get in how a bra fits using the scoop and swoop method (shown here). Scooping and swooping de-squishes your breast tissue so that it isn’t being smushed into your armpits or compressed in the cup. It also makes your boobs sit properly in the cups, so that they are being lifted rather than just covered.

This bra is a Charnos 34F. The wires seem to be encapsulating my breasts, the band can’t be stretched too far, and there is no overspill – in fact there is very slight gapping at the top. If I didn’t know better, I would think that it fits, or that I maybe need a 34E. However, the wires are not sitting at the root of my breasts – they are a good inch too low down. If I scoop, swoop and align…

There is now very clear overspill. The band can now be stretched out extremely far, as my breast tissue is no longer taking up the band space. It is now clear that a smaller band and larger cup are needed.

This is a George 34F. Once again the band seems fairly firm, and the cups gape slightly. After adjusting, it is very much too small in the cup and large in the band.

Another George 34F. Once again, a seemingly too-large cup and firm band, when in fact the cup is too small and the band too large.

Ewa Michalak HP Fuksja, 30J. As the cup is much bigger, it appears to gape significantly more than the 34F bras, and the band appears slightly small. After scooping, it is clearly too small in the cup and good in the band.

Freya (worn to death) 32J. Once again, cup wrinkling changes to slight overspill. The wires are slightly too wide for me in this bra, resulting in cup wrinkling at the side/bottom after adjusting. The band is also slightly too big.

I had originally made a video for this post, but I had technology troubles :p This is the Bravissimo Alana in a 30K, screenshotted from the original video. The far left is before, showing obvious wrinkling. You can also see, as there is a sheer section, how the underwires are sitting too far down. After adjusting, it is just about a perfect fit.

Finally, Cleo Alexa in a 30J. As before, there is gapping at the top and the band seems too tight. Afterwards, ignoring the fact that I’m leaning forward in the last picture, it seems to fit well. There is wrinkling at the bottom of the cup, though this is actually because I hadn’t adjusted fully – I may have gotten impatient toward the end, oops. 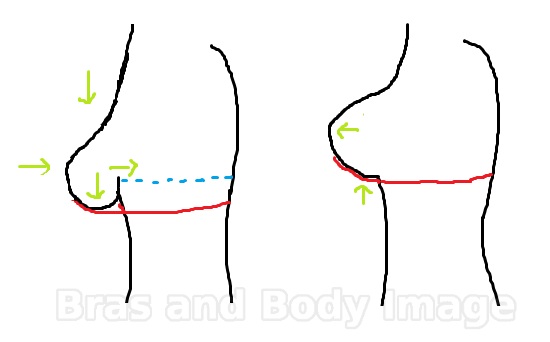 This is a quick diagram showing what is happening in a too-small bra vs a well-fitting bra, with the red representing where the band sits, the blue showing where the band should sit, and the green arrows showing where the bra is pushing breast tissue. In an unadjusted bra with a too-small cup, the band sits well below the underbust. The cups compress the breast tissue, and push it down and towards the torso. More often than not, this provides very little support, and the bra is acting more as cover. The breasts are unlifted and “squished”, and often tissue migration will occur. In a well-fitting bra, the wires are at the breast root, the band is horizontal at the same level, and the cups lift the breast tissue up and forwards.

How to scoop and swoop

You may find that you need to scoop and swoop a couple of times before you are fully adjusted, especially if you have larger breasts or migrated breast tissue. If after doing this, you find that you have overspill, the cup is too small – try a bigger cup. If the cups seem to fit well straight after scooping and swooping, but then your breasts seem to move back out of the cups when you move around, this suggests your band is too loose to keep your breasts enclosed in the cups – try a band size down and a cup up (e.g. 34D -> 32DD). For more help finding a better bra size, check out this post to troubleshoot your bra fit issues.

Putting your bra on properly is a very simple thing that can have a huge difference, and (as I learned first-hand) is often not taught by high-street fitters. Hopefully this has helped showing how a bra should fit! And once again, there is a great video showing how to scoop-and-swoop on Busty Resources

The scoop-and-swoop should be done by everyone, not just those with conventionally large breasts. Here are some comparison pictures by reddit users, shared in /r/ABraThatFits. Huge thanks to these ladies for letting me add their pictures! 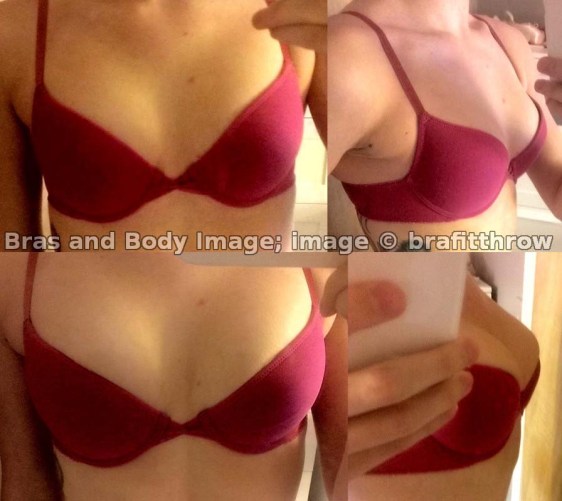 These pictures were made by reddit user “brafitthrow” and shared here. In these pictures she wears a 32B, which, though it appears to fit before adjusting, is actually too small in the cups and too large in the band. She in fact needs a 30D. 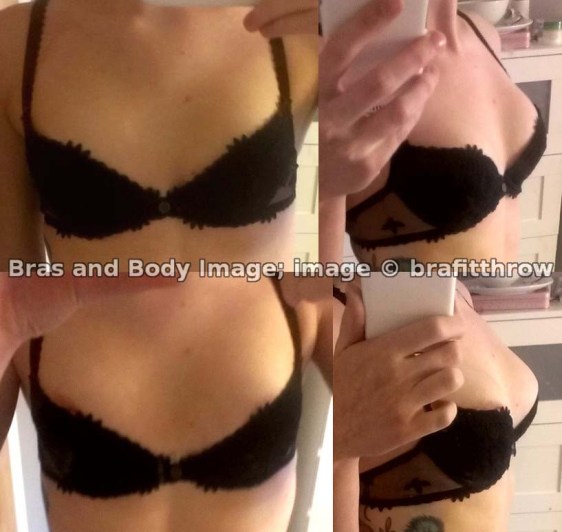 By the same user. In these pictures she wears a 34A, altered to be about a 30B. Once again, to the untrained eye it would appear to fit. However, after adjusting, it is clearly too small in the cup. 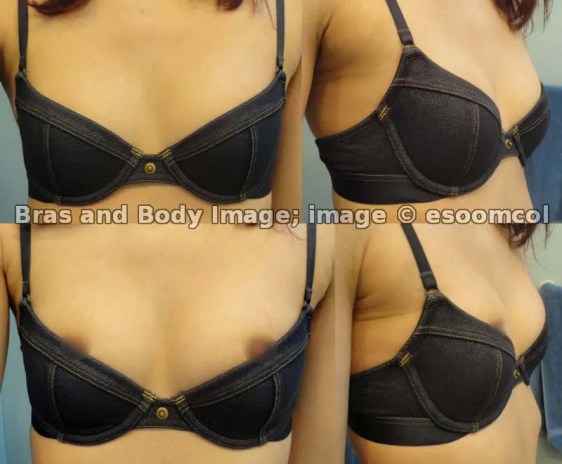 These pics were taken by user “esoomcol” and shared here. This is a 32AA Aerie, before and after. As expected, though it looks like a good fit in the cups before, it is actually much, much too small. 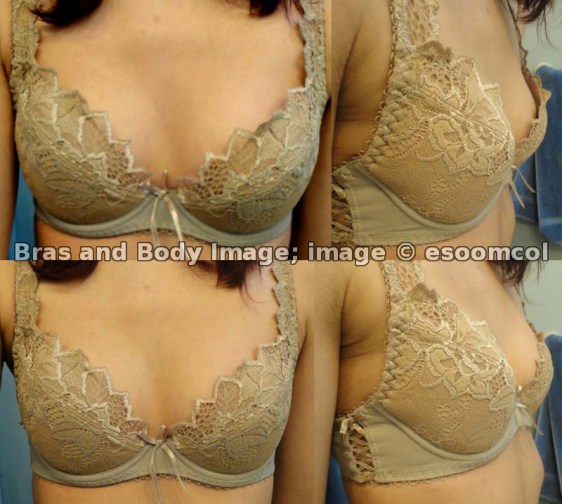 The same user in a 30C Lepel Fiore. Though the cups look much too big, after adjusting, it appears to be fairly spot-on.

I hope these pictures have helped to show that scooping and swooping is a vital part of putting your bra on for everyone, regardless of size. If anyone else has before/after pictures that they think would be a useful addition, please get in touch!

108 thoughts on “Putting your Bra on Properly” 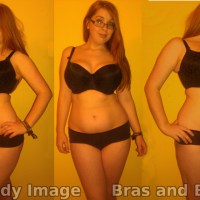 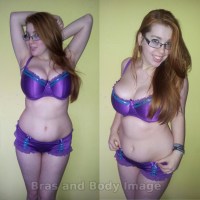