Until recently, my only experience with Ewa Michalak (Effuniak) was the HP Fuksja in a 30J, which I got quite a while ago on sale. While it’s definitely not the best fit for me (small in the cups, loose in the band), and I’m not the biggest fan of two-hook bands, it’s a gorgeous set that convinced me this wouldn’t be my last taste of EM! After all, how many brands can boast padded bras in such an impressive size range?

So, when I could finally afford it, I clearly had no choice but to get a few more sets!

[Update 15/05/13: Since writing this review, I have realised that the cups of all of these bras are actually too small, something that was disguised by issues I have with the construction. All comments about the band tightness, wires, appearance etc still hold, but I believe I would actually need a 30KK/L in these bras, along with alterations to the straps/armholes. To see the construction issues with these bras and my revised sizing advice, see this post.]

The first set I decided on was the PL Czerwona Panterka, which at the time was on sale for 99zł, with the matching thong brief in a size 14.

Based on reviews I’d read previously, I went up a cup and stayed with the same band size, so this is a 30K.  I had to custom order this so it was non-returnable, but I still paid sale price. If I ordered again, I think I would stick to a 30JJ for the bra, as, though it fits, I think it loses some of the “oomph” I was hoping for in a padded plunge style. I would also size down to a 12 in the briefs, as they are made of a very stretchy material. In terms of band tightness, this bra stretches to about 29.5 inches, so I don’t think sizing up is necessary for a true 30, though those on the upper end of their band may be more comfortable a band up. Personally, I prefer to wear as tight a band as possible, and wear an extender if necessary, to prolong the lifetime of my bras!

Now, the bra itself! As if it needed saying, I love the look of this bra! Red and leopard print gets a big tick in my book. I especially love the lace panels on the band and gore, and the detailing on the straps, however the detailing does render the straps only half adjustable. I was also quite surprised at just how narrow the wires are for this bra: they’re narrower than in the HP Fuksjja, just bordering on too narrow at the sides for me, which is definitely a first! It gives a very rounded but forward profile, and has a (much more comfortable) three-hook fastening. It doesn’t give quite as much uplift as I’d hope, something I think would also improve in a 30JJ.

The second set I decided on was the PL Black, which is still available for 129zł, and the matching brief in a size 14.

Once again, I adore this set! The fit is about the same as the PL Czerwona Panterka, and again I feel I could have gone for a 30JJ. The band is of a similar tightness, and, though I don’t think I would, some may prefer to size up.

This bra has of a nude coloured (for me) padded base, with elastic black lace overlaid. The level of detail isn’t normally visible without the contrast from my camera flash, but it’s definitely there – I love the polka dot mesh details! In particular, my favourite part of this set has to be the briefs! The polka dot mesh, sheer panels, the faux-suspender clips, I am absolutely in love with them! This is one of the times when I simply can’t justify NOT buying the matching underwear! As before, the bra has a three-hook fastening, but it also has fully adjustable straps.

Finally, my last Ewa purchase was not planned! I found the PL Carmen in a 30K on a bra sell/swap page, and couldn’t resist getting it. Oops! It’s still available, now on sale, for 109zł. Not all sizes are listed, but if you’re interested in a bra, it’s always worth emailing to see if they’ll make it! 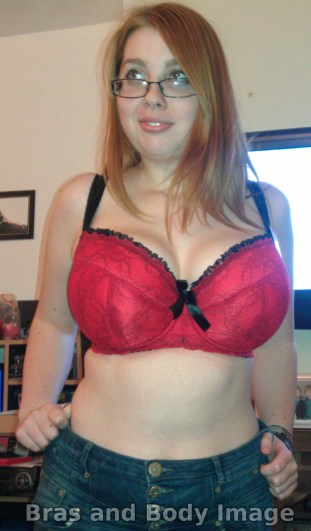 Trying it on as soon as it arrived. What can I say, bras are exciting! Since I didn’t buy directly from Ewa, I don’t have the matching briefs for this bra, and (as I so often do) will have to mix and match!

This bra I found to be tighter in the band than the above two, and I would quite possibly have preferred to size up. Like the PL Black, this bra has fully-adjustable straps, and a comfortable three-hook fastening. Once again, I think I could have done with a JJ, but as this came with removable pads I can still get a bit more “oomph”! Overall, I could have probably done with a 32J for this style. I think the tightness in the band may be due to the fact that the pattern covers both the cups and the band, a detail that I am loving! I haven’t owned many red bras, and I am not disappointed at all with this. It may just be a strong contender for my Christmas bra!

Ewa Michalak bras normally fall around the 129zł mark (about £26 at the moment), while briefs fall around 39-49zł (£8-£10). My order came up to 306zł for the sets, 27zł for delivery (which took about two weeks from payment date), and a PayPal fee of about 43zł, a total of about £75 for two sets, which is quite reasonable really! The PayPal fees are definitely something to keep in mind while ordering.

Now, to stop myself buying the PL Milady…Swoon!

5 thoughts on “Treats from Poland!”