The main reason I’ve been dithering about posting this for so long is that I’ve made videos for both bras doing a bounce test, and I’ve been weighing up whether it’s worth the trolls and pervy comments! But, I’m sure it’ll be found useful, so I’ve decided to include the videos, though you might want to up the quality on each one. For comparison, I first did a bounce test in a regular, well-fitted, balconette bra. This is the Boudoir Beau, reviewed here:

The first sports bra I got was the “nude” Freya Active Underwire in a 30JJ, my usual size. So far it’s only available in beige, black and white, but hopefully this will change at some point! 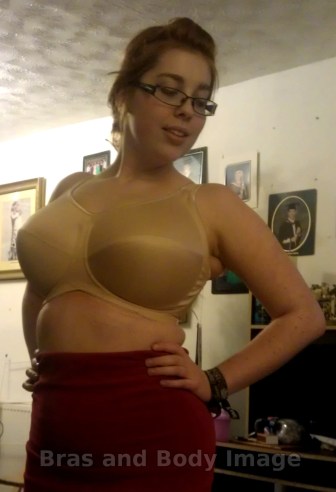 The Freya Active Underwire is an encapsulation style sports bra. The cups are constructed with a horizontal seam straight across, which tends to give a pointed shape with a low apex on larger boobs, though I didn’t find the shape too bad. The unadventurous colour and pointed shape mean it’s not really made to be outerwear, so I’d definitely chuck a top on before going to the gym in this! It has wide, padded comfort straps, and four sets of four hooks and eyes. I also really appreciated the Coolmax fabric and mesh panels, designed to wick away sweat during exercise. I found the combination of sweat-wicking fabric and separation was great for keeping cool!

In my initial trying on I believed it was true to size in the cups and band, but a zumba session later, I found I had empty space in the cups (due to the too-wide wires) and was wishing for a tighter band. I measured the stretched band as 31.5 inches, and, given the empty space at the sides, I think I would ideally wear a 28JJ in this. However, in a 28 band, this stops at a G cup. Yes, really. So, since I can’t return it any more, I’ve had to wear it on the third set of hooks with the straps tightened to get better support.

In terms of bounce reduction, it’s definitely a huge improvement from a regular balconette bra, though I’d like to try with a cup down. Due to where the neckline is, I have some tissue escaping on top, which I don’t really like during exercise.

I think it would be perfect for me if the neckline was a bit higher, and the band was more true to size. I would also love to see it in more fun designs and bright colours – for instance, I love the Jet and Magenta colourways of the H-cup versions. Overall I’d say it’s a definite improvement from a regular bra, but I wouldn’t wear it for high impact activities.

The second sports bra I have is the Royce Impact Free. I had heard that it runs small in the cups, while the band runs either small or true to size (depending on the colourway). With this in mind, I decided to try out a 30K in the Grey Marl. 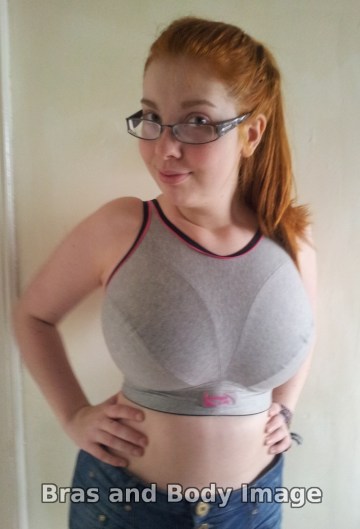 Unlike the Freya, this is a compression style bra, so it doesn’t have “cups”, as such, and there is no separation. This means it has a mono-boob effect, which isn’t for everyone! Because it works through compression, it is quite minimising from the side, and it gives a fairly rounded shape. It has padded comfort straps which are quite close-set on the front, though I found they kept moving outwards at the back. I think this may be because the sides taper to the band very suddenly. Combined with my flared ribcage, the straps aren’t kept central very well, and are going to move out!

It has the standard three sets of three hooks and eyes, and a velcro cover so the bra can be worn as outerwear (if you’re so inclined)! Personally I’d be pretty tempted, as I think it’s stunning for a sports bra. Saying that, it kept getting some odd puckering along one of the seams, making it look like your nipples have popped out to say hi. Which, I assure you, mine hadn’t – it’s the seam! Also, a lot of people have reported having trouble with the velcro curling up, though mine hasn’t started doing this yet.

It sports a very wide band, which I think is great for extra support. At first, I thought the band was far, far too small – I needed assistance to get it done up! After some trial and error, I found it was much easier to do it up and then put on the straps and place my breasts into the cups. I measured the stretched band as 29.5 inches, so it’s on the small end of a 30. However, at least in my case, I think it has to be to give the best support. Once I had worked out how to put it on without strangling myself, I found it to be a fairly good fit all over. I’d be tempted to try a cup down just to see, but as far as I can tell, this size is fairly spot on!

Compared to the Freya, I found this bra much better for bounce reduction. Due to the high neckline, I had no tissue escaping, and I felt much better supported. I was a bit annoyed, actually – I had bought this on a whim and wasn’t expecting to keep it! Others may not like the high neckline, as I imagine it would be hard to cover with a vest top or similar. But, in my size, it really does need to be this high for support and coverage. The downside of the Royce is that it doesn’t have sweat-wicking fabric, and as it’s a compression bra, you’re very much smooshed together. This meant that I got a lot sweatier exercising in this bra!

So all in all, my main problems are the lack of sweat-wicking material, and the wide strap placement at the back. I think I’m going to try using a strap converter to turn it into a racerback, as this should relieve the problem I have with the strap placement. Aside from that, I think this is a pretty great bra. Most reviews I’ve read didn’t particularly like this bra, but I’ve found it to be the best sports bra I’ve tried. Who would’ve seen that coming? 😛

19 thoughts on “My Hunt for a Sports Bra” 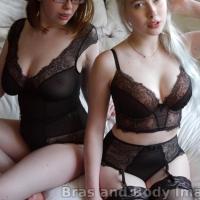