Recently, the lingerie world has been buzzing after a certain announcement from Parfait by Affinitas. Until now they have stocked 30-40 D-G, but in June they announced that they would be expanding three styles up to a K cup for AW13: the Charlotte, Sophia, and Alexis babydoll. I was very excited by this announcement, and upon release was lucky enough to get my hands on two of them, the second of which I will be reviewing in a few days. 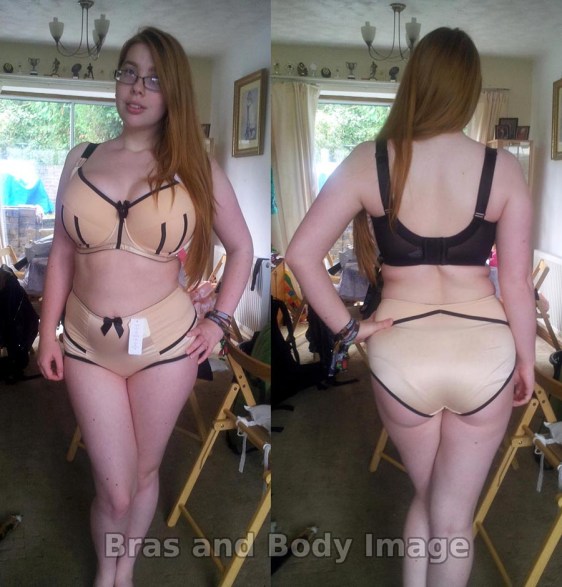 The first set I tried was the Charlotte Padded Plunge, which now comes in 28-40 D-K. This has been my dream set for a long time, so when I won a £50 LCL voucher in Fussy Busty‘s blogiversary giveaway, I immediately knew what to get! I seem to have settled at a 30K in most bras at the moment, but I had heard that the cups ran small, so I opted for a 32K. I’m currently a UK 14-16 with 42 inch hips. and I opted the matching high-waist briefs in size L. The briefs didn’t quite reach my natural waist, and were also a bit snug on my hips, so I could have done with a size up. As I had some money left from the voucher, I also got the red high-waist briefs in a size XL, which I found to be a much comfier fit.

The Charlotte has three-part cup construction with outer side-support panels, which is good to give an upfront and rounded shape. It is cut tall at the sides and comparatively low in the middle, so it’s something of a cross between a plunge and a balconette. I find it gives me a modest, “soft hills” sort of cleavage. The cups are a lightly padded, matte material, while the front of the band and side-support panels are a shine satin. I would describe the colour as a buttery pecan, so it’s a fairly good nude colour for pale, yellow-toned skin like mine. For those with pink-toned skin, there is also a dusty rose colourway that could work quite well. Black piping on bras is one of my favourite design features (so sophisticated!), so I think it goes without saying that I love the look of this bra. The straps and band elastic are black, which adds to the boudoir look, but it does mean it can’t be worn as a nude bra under light clothes. I feel it strikes the perfect balance of sexy and supportive to be worn as both a bedroom and everyday bra, and the colouring would work fine under most darker clothes.

Previous runs of this style were described as tight in the band, but I found mine to be fairly true to size, stretching to roughly 32.5 inches. Despite me usually wearing a 30 band, I still find this bra wearable – I think the stable four-hook band combined with my V shaped ribcage means the band rides up much less than the average 32 band would. I found the cup volume to be fairly good, so I would say that it runs about a cup small. The cups seem to be fairly mid-depth all over (neither deep nor shallow), which meant that I had slight overspill at the centre and slight gapping at the straps, due to me being centre-heavy, but it isn’t enough to make it unwearable. I would say this bra is best suited to those with either lower or even fullness. I am fairly close-set, so the moderately tall gore (11cm) doesn’t quite lie flat on me at the top. The wires measure as mid-width, but they didn’t distort when the band stretched, making them more narrow to mid-width when worn. I do personally prefer slightly narrower wires, but others will have different preferences, and they are by no means unwearable. My favourite thing about this bra has to be the super-thick comfort straps, which measure in at an impressive 2.7cm, compared to the standard width of 2cm. The thick straps are a very welcome change, providing much needed relief for my shoulders.

The main issues I had with this bra were the side height and cup height. The cup itself is quite tall around the strap, which I think emphasises the gapping I get. I think the issue that will affect most people is the side height, which is 14.2cm in this size. I would consider anything over 12cm to be quite tall; for comparison, most of my bras have a wing height of around 11cm, and the tallest wing height I’ve ever tried was 16cm (CK SS12 bikini in a 30K). So far everyone I know who has tried this bra has found the sides to be a problem, including myself.  Due to the comfortable padded material I didn’t find the sides to dig or rub, but I did find the height itself slightly uncomfortable. The height also meant that my arms pushed the cups down slightly when worn, so the cups do end up sitting about 1cm below my root. I think the height could be a dealbreaker for anyone with high-set breasts and/or a short root. I have considered altering the sides to be lower, but as the wires are also tall, I am not sure this would be possible without altering or replacing the actual wires.

Overall, the cup construction is outstandingly sturdy – it really is like sexy scaffolding, as it manages to be both a heavy lifter and a sultry set. I do wonder if this sort of construction would work well for a strapless, as even with the straps off, it is extremely supportive. All things considered I would say the Charlotte is fairly successful on me, but I really think it could work for a larger range of people if the centre was slightly deeper and the sides were slightly lowered. Despite the issues I found with the Charlotte, I think Parfait are a very promising company, and I hope they can take the feedback they’ve been given on board for their future collections. I really am so pleased to have more options around my size – now I just have to find it in red 😉

For those in the UK, the expanded sizes of the Parfait Charlotte are available from Large Cup Lingerie for £30 (peach colourway only). For those in the US, the Charlotte is available from Beautyfull Bras for $36 (all colours). The items in this review were purchased with a voucher to Large Cup Lingerie. Though most of the items were free, this is not a sponsored post and all opinions are my own.