As I mentioned in my last post, Parfait have recently expanded three of their bras up to a K cup for AW13: the Charlotte, Sophia, and Alexis babydoll. I have reviewed the Charlotte here, but I was also lucky enough to get my hands on the Alexis babydoll. This is the first babydoll to be made up to a UK K-cup, so I was very excited to try it out. 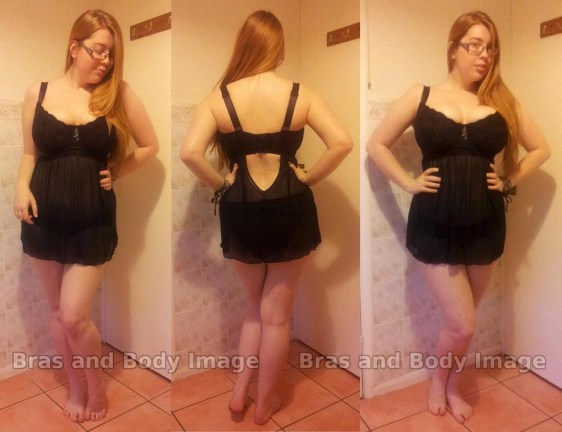 The Alexis now comes in a size range of 30-40 D-K, and is currently available in both Black and Ivory. I received this in my current usual size of a 30K. I didn’t get the matching briefs with this, but there is both a bikini brief and an unbelievably stunning high-waist brief available if you do decide to get the whole set. I found the babydoll to be a good length on me – just long enough to add mystery, but short enough to be flirty. The keyhole back gives a peek of skin, while the neckline of the bra gives somewhere between a plunge and Marie Antoinette style cleavage. I am sure some women will want a babydoll for bedroom attire, so I was quite happy to see the cleavage I got from this.

The cup construction of the Alexis is not something that I would have ever expected. Most full-bust bras are constructed with multiple panels, but the Alexis seems to just be one piece of sturdy black lace, with a dart at the bottom to shape the cup. This results in a rounded lower cup with a flatter section at the top. I was surprised at the fairly round shape this cup construction gave me, which I think is down to the inner side-support sling. It seems as though the sling (which joins the bottom of the cup to the strap) is giving most of the lift and support in this bra. The sling is made with a lightly padded material, whereas the cup itself is completely unpadded, which gives the bra a very sexy appearance. The straps and band are made of a standard black elastic, while the wings and front of the band are layered with a black shine satin, similar to the kind used in the Charlotte.

Unfortunately, I didn’t find the sizing of this piece quite right for me. While I usually wear a 30K at the moment, I believe I would need at least one cup up and at least one band size down in this, so I think this fits more like a loose-banded 32J (or a Panache 32HH). It is definitely loose for a 30 band, stretching to almost exactly 33 inches, making it one of the loosest 30 bands I’ve ever tried. Though the cups might not look too small in these pictures, I should point out that I didn’t fully scoop, as scooping properly resulted in significant overspill. This means that I would probably need more like a 28L, but as this set doesn’t go below a 30 band or above a K cup, my best option would probably be altering a 32K. Unlike the Charlotte, which I found supportive despite the 32 band, this band rides up even on the tightest hooks. I would say the cups run similarly to the Charlotte but the band is looser, so this 30K fits perhaps like a 32JJ Charlotte would. The cups seem to have the same sort of depth distribution, so they are too shallow in the centre for me and slightly too tall around the strap.

The wires measure as mid-width, but due to them not stretching with the band they are quite narrow when on, making them a good width for me. I have the same problem I had with the Charlotte of the sides and gore being too tall for me, with the wings measuring at 13.2cm and the gore at 11.7cm. With the Charlotte, I found that I had empty space at the bottom of the cup which I thought was due to my arms pushing the cups down, but I don’t seem to have that problem in this bra. What I did notice is that the wires themselves are shorter than the wire channels by about 2cm, so you can move the wires either more towards the gore or the sides. Due to the unpadded material this means the excess material can be folded down, effectively lowering the height. I have fewer issues with high sides than high gores (due to being close-set), so I pushed the wires into the sides after taking these pictures, which made the gore a fairly reasonable height for me. You could also have the wires somewhere in the middle, giving an effective side height of 12cm and a gore of 11cm (both of which would be quite average measurements for most of my bras).

This bra has a square back rather than the leotard back that most full-bust brands choose, something that is quite new to me but didn’t seem to give any problems. The straps seemed to be quite close-set at the back, but this might partially be due to me fastening the bra on the tightest hooks. It has a deep full-band, fastening with four sets of hooks and eyes, and the straps are wonderfully thick and supportive at 2.7cm. In terms of appearance, I think this piece drips glamour – there are some tiny details, like the crystal drops on the gore and the shine satin panels on the band, that just add a little bit more sophistication.

Despite the fit issues I have with this set, I am considering holding onto it, just because a babydoll around my size is such a welcome first (although I am looking forward to some of the other new babydolls popping up soon). I am hoping that the overspill will just look like mega-cleavage with some of my lower-cut/straighter necklines, and if it doesn’t I can always keep it as a bedroom set. It is possible that my experience isn’t quite the norm, so it may still be worth a try for those who who need 30 bands and/or J+ cups – I just wouldn’t be too hopeful. I imagine this will be a safer option for those who need at least a 32 band and at most a J cup, as there will be more space to play with the sizing. As far as I know, the expanded sizes of the Alexis aren’t being sold in the UK yet, something that will hopefully change soon! For those in the US, the Alexis babydoll is available from Beautyfull Bras for $59 (Black or Ivory).

Item provided for review by Lingerie PR. Though I received this free of charge, this is not a sponsored post and all opinions are my own. 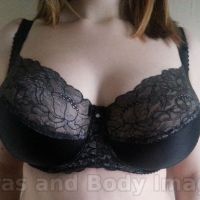