Curvy Kate‘s Showgirl cuts are some of their most popular pieces, combining gorgeous designs with amazing cakes-on-a-plate style cleavage. Until recently, most of Curvy Kate’s Showgirl cuts were only available in 28-30 D-J and corresponding sister sizes, and the small cups and loose bands meant the actual size range was smaller than it seemed at face value. Of course, this didn’t stop me from stuffing myself into them, but I wished the size range could increase. So, I was happy to see that Curvy Kate have been gradually increasing their range of styles and sizes, as well as altering their sizing with customer feedback. In SS14, they introduced a few padded half-cups styles covering 28-38 D-J: the Carmen longline, the Ritzy half-cup, and the Ritzy babydoll. This review is of the Ritzy bra, though the babydoll should fit similarly. 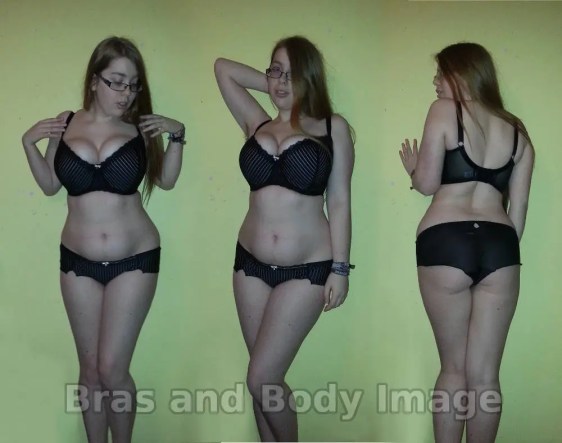 My current usual size is 30K in most brands, with a 14 in briefs. As my usual size wasn’t available, and knowing CK briefs often run small, I opted for a 32J bra and 16 briefs. I found some of the previous half-cups, such as the Tease Me or Thrill Me, to run roughly 1 bandsize big and at least 2 cups small. However, I found the Ritzy to be fairly true-to-size – it seemed to be about 1 cup small for me, and the three-hook band felt only slightly loose. I believe a 30K would be the best size for me, but the 32J fit much better than expected. I initially thought that the Ritzy only had two vertical panels, compared to the Tease Me and Thrill Me’s three panels, but this is just the fabric panels on the outside – if you look at the inside, you can see it is made with three vertical panels. Before I realised this, I expected there to be less uplift than I’d had in the aforementioned bras, but I was pleasantly surprised to find this was not the case.

I’ll start with the appearance of the set, and as with most things I pick to review, I am quite a fan! All things pink, pastel and floral can be expected in Spring/Summer collections, so this bold menswear inspired piece is an unexpected change. The design is straightforward but striking, featuring a black base with almond pinstripes. It keeps some “feminine” aspects, such as the black lace across the cups and a small bow on the centre, but it remains one of the more interesting pieces I’ve seen this season. The briefs feature the same pinstriped fabric at the front, with a sheer black back and a small keyhole detail. I usually find CK briefs to run small, but these seemed to border on being slightly big, so I am wondering if they have also brought their brief sizing more in line with other brands.

The bra has a black padded base with the overlaid pinstriped fabric. The outer layer of fabric is decorative and can move around slightly, which is why there are some wrinkles towards the centre. The main fit issue I had was how shallow this bra is at the bottom – there was about an inch of space that my breasts could not get into, due to me having more lower fullness than the bra allows. While this does mean the bra isn’t exactly a perfect fit on me, it does push my breasts up more, creating the most Marie Antoinette style cleavage I have ever had. Combined with the too-small cups, it does border on giving me pushed-against-a-window squareness towards the centre, but I don’t think it’s really noticeable to anyone other than myself. The shallow bottom and open top lead me to think this would be best suited to full-on-top breasts, and likely tall-shallow shapes.

The bra is fairly shallow all over – I would say it’s slightly deeper than my 30J Tease Mes or Thrill Mes, but I’m not sure how much of this difference is due to the change in size. Combined with the fact that it has narrower wires than I was expecting (I would describe them as mid-width), it seems to me that most of this bra’s volume is vertical. The wires are shorter than the wire channels, so roughly the top inch of the gore is fabric only, and did not sit flat on me, allowing my boobs to fall slightly more towards the middle at the top. This looks worse than it actually is in the full-length pictures due to my pose – the close-up above is more accurate.  I also found the wired part of the gore sat away by about half a cm anyway, though I think this would be improved in a cup up. I usually get gapping near the straps of most bras, which is somewhat exacerbated in this bra due to the straps being wide-set at the front. I also have fairly narrow shoulders, so wideset straps tend to rub the front of my arm, though this may not be as much of a problem for those with broad shoulders. 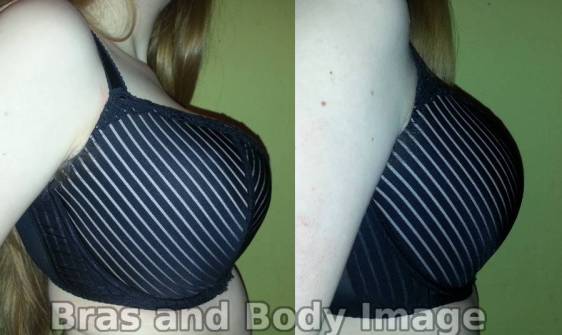 The bra is fairly tall at the underarm, which means it does rub me a bit throughout the day, so it may not be the best choice for those who are high-set or short-rooted. However, those who struggle with escaping sideboob and need taller sides will likely get along with it much better. I expected that the two vertical panels would give a distinct vertical “line”, but I found the shape to be very rounded from every angle. The left photograph is directly side on, whereas the right photograph was taken closer to my back (more to the left), so you can see the impressive shape it gives. I thought the shape would either really minimised or somewhat square, but I found it to be extremely uplifted and youthful, with a clear rounded apex.

I wasn’t sure if the shape was visible from the bra alone, so this is the bra under an Urkye top. I think the uplifted and rounded shape is very clear in these! In terms of support, the upper parts of my breasts are uncovered, so I get a fair amount of jiggle on top – not necessarily the kind of bra you want to be wearing to run for a bus! It’s probably not the most practical bra, and it’s not the kind of bra to wear if you want to minimise to downplay your bust, but for impressive shape and cleavage, it’s my current go-to.

All in all it’s a stunning bra, and while it might not be the most supportive bra in my wardrobe, it definitely has a place. It isn’t my personal idea of an everyday bra, but due to my current lack of decently fitting bras, it’s ended up in regular rotation anyway. If you want lots of uplift and a round shape, and don’t mind wide-set straps or a bit of jiggle, I would say this bra is worth trying in your usual Curvy Kate size.

Item provided for review by Curvy Kate Lingerie. Though this set was received free of charge, this is not a sponsored post, and all opinions are my own.

16 thoughts on “Dressed to Impress with Curvy Kate’s Ritzy” 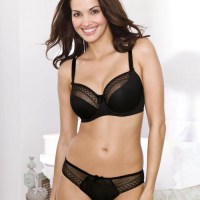