Back in July, I went down to London for the weekend. While I was there, there was one place I knew I had to visit: Bravissimo! Bravissimo stock a huge range of styles and sizes, and their fitting service is regarded as one of the best in the UK. So, when I had some time, I headed down to Covent Garden to get fitted and try on some different styles. 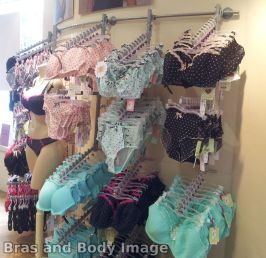 They were quite busy on the day, but they managed to fit me in after about 30 minutes. I have been fitted at Bravissimo in Manchester before and found it to be a good experience, so I didn’t have any worries beforehand. However, I did find that my fitting wasn’t quite as good as I expected.

Once I was called, my fitter took me through to one of the changing rooms, explained how she would be fitting me (by eye), checked the fit of my current bra and asked me a few questions about the size I usually wear (30JJ in Panache Floris/Jasmine, 30K in Bravissimo). Based on this, she brought me a few styles she thought would fit me. 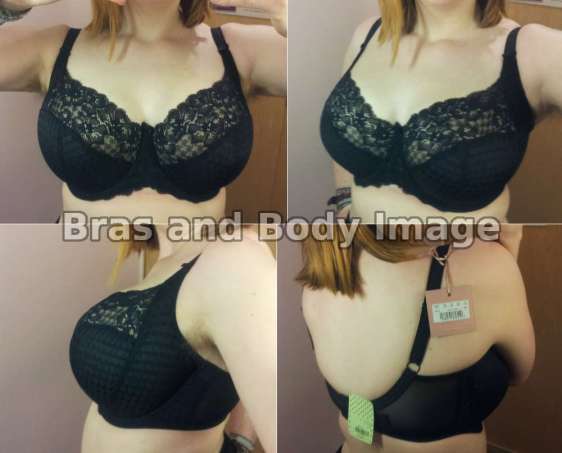 The first bra I tried was the Panache Envy in Black, size 30JJ. My fitter asked if I would like her to leave while I put on my bras, but I opted to let her stay in, as it meant she could help me to fasten the bra and get adjusted properly. In terms of construction and sizing, the Envy is very similar to the Jasmine, featuring narrow-to-average wires, side support panels and a stretch lace upper section. However, while the Jasmine uses something closer to a rigid laminate fabric for the lower cups, the Envy is a very soft material. I personally felt this made the bra noticeably less supportive, but it was definitely more comfortable, and it still gave a good shape – on me it was very rounded and slightly more minimised than the Jasmine’s, with less of a visible apex. Overall this is definitely a great bra, and my fitter and I agreed this was a great fit in the cups – unfortunately, the band was too large even on the tightest hooks (fitting more like a 32 band), so I decided against buying it. 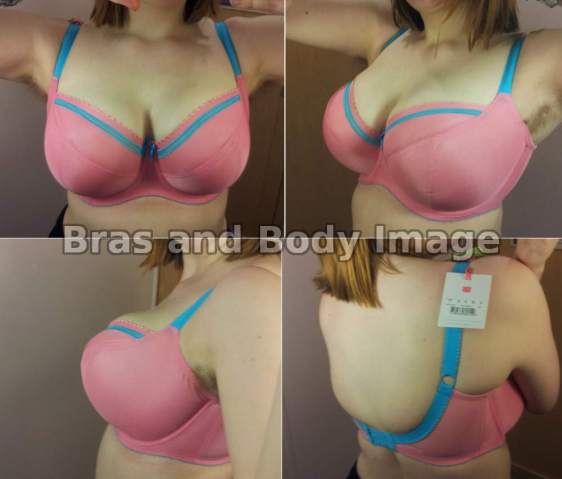 One of the next bras I tried was the Cleo Lily in Pink. Considering I had said my usual size was a 30JJ in Panache, I was fairly surprised when she came back with this in a 30J (especially considering she’d brought a 30JJ Envy). However, I hadn’t tried this style, and she said it ran very large in the cups, so I gave it a try. Trying it on, it was clear to me that though the band seemed fine, it was much too small in the cups and (like many Cleo styles) slightly too shallow at the bottom for me. This resulted slight wrinkling at the bottom (due to my breasts pushing the cup material down) and noticeable overspill at the top, even with the straps loose enough to pull up to my ears. However, my fitter believed this was a great fit, and could not see any overspill. Her solution for the wrinkling at the bottom was to keep pulling the bra up, even though it was already at my root, resulting in it (very painfully) sitting on breast tissue. I did try to explain that my close-set and narrow root shape tends to be incompatible with most underwires, which may be another reason for the slight wrinkling at the very bottom/sides, but she didn’t seem to pay much attention. At any rate, this colourway seemed beautiful and supportive, and I would’ve loved it to fit me, but it was clearly not going to happen. 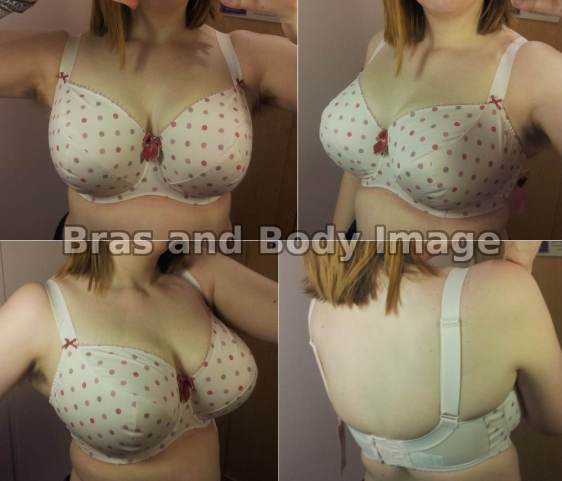 The last bra she had brought me to try on, the Dotty Spot in Cream/Rose. I had said my usual DS size was 30JJ or 30K (as I find it usually runs about half a cup bigger than most Bravissimo balconettes), but again I was surprised to find that she had brought me a 30J. I tried it on, and while I was relieved to see that it wasn’t as small as I expected, it was still definitely too small. Even with straps loosened, I had quite a bit of overspill towards the centre, and the shape wasn’t what I’d expected (somewhat downwards pointing). I would say this bra is more generous than previous DS colourways, perhaps fitting more like a 30JJ (possibly slightly bigger) in other Brav balconettes. Again, my fitter pulled the bra as far up as possible until it was sitting on my breast tissue – not comfortable. I would’ve actually loved if this size had fit me, as the wires and height were much better for me than many of my bras, but when I moved around it was clearly too small. I asked if I could try it in a 30JJ, but the fitter deemed the 30J a good fit. At this point she decided my standard size was 30JJ, and went to get some more bras to leave with me. 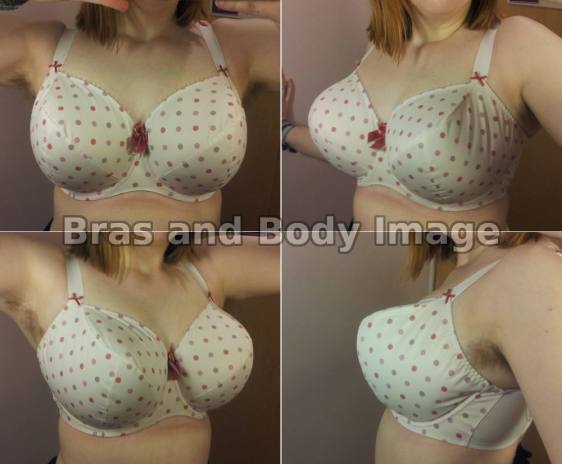 After my fitter fetched more bras and left me to my own devices, I was glad to find she had listened and let me try the 30JJ Dotty Spot. Again I found it very generous in the cups (similar volume to a 30K in other Bravissimo balconettes, or a 30KK Alana), which seemed just about spot on for me. I found the shape much better in this size, with good coverage and no overspill. I get slight wrinkling along the upper horizontal seam when I slouch or put my arms forward (as in the angled pictures), and the wires are slightly too high in the centre, but otherwise I am much more comfortable in this size. I did end up buying this bra, and hopefully will write a full review of it soon. 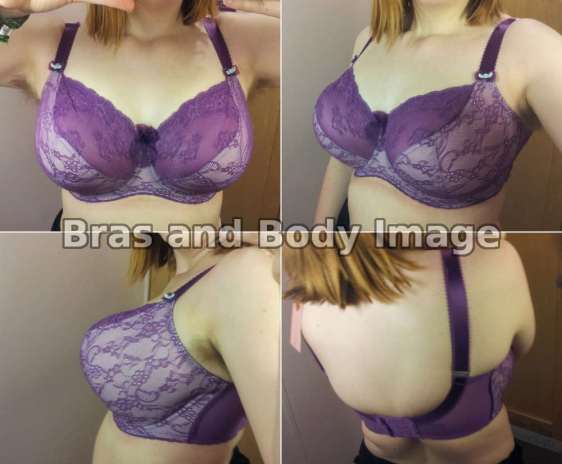 One of the other bras she brought was the Boudoir Beau in Violet, size 30JJ. I found this bra to be a fairly reasonable fit, possibly running half a cup to a full cup bigger than most other Bravissimo balconettes. It seemed slightly more generous than my Jet/Emerald Boudoir Beau, and it seemed to give a much rounder shape. Again the wires are too tall in the centre for me, but the appearance and the fit aside from that seemed pretty great, so I did end up also buying this bra (again, review to come soon). 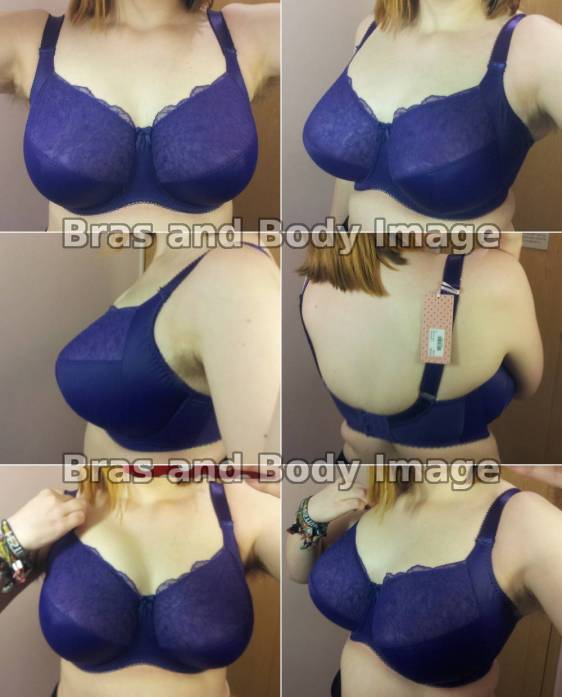 This is the Melrose in Iris, size 30JJ. My camera didn’t capture the colour very well, but in person this is a gorgeously rich Cadbury purple. This is a full cup style, quite different from the balconettes I usually favour, as they don’t usually give me the sort of uplift and shape I like. I found that in this size, this bra gave me a fairly downwards pointing profile, which was quite natural and almost retro. However, I did also think that this bra was too small – as a full cup, this bra should give more coverage than the Dotty Spot, yet this was not the case. If I pulled the cup up slightly to where felt about right, I did get a much better shape, but I also had definite overspill. One thing I noticed was that the straps seemed to be set slightly more centrally than in most bras, so if you lean towards a more natural profile and have trouble with wide-set straps, this could definitely be one to try. I imagine I would need my usual 30K in this style, but I did not bother trying it as I wasn’t too keen on the style anyway. Overall though, it felt very comfortable and supportive, and could be a great choice depending on your aesthetic preferences. 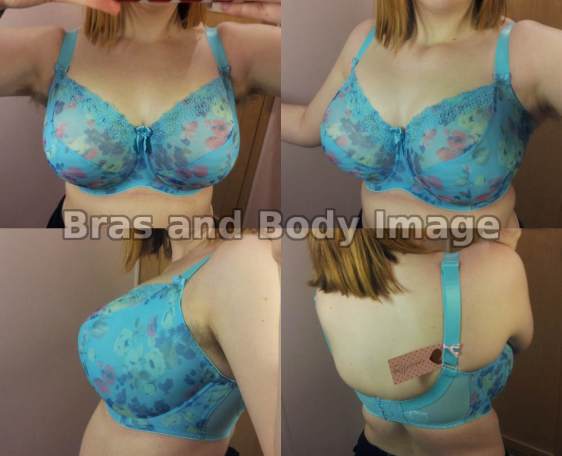 Another bra she brought was the Floral Haze in a 30JJ. This bra is a new underwired balconette going up to an L cup (KK cup for 30 bands), so I was very keen to try this out. I thought the style was beautiful and seemed comfortable, but the 30JJ was too small in the cups, giving lots of overspill towards the centre (see the angled picture). So, I leaned out of the changing room and asked to try it in a 30K. 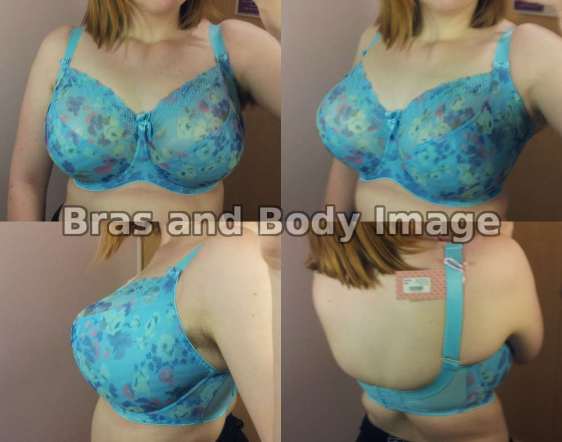 Finally, the Floral Haze in a 30K. This was a much better fit, giving no overspill anywhere and what I would personally call a wonderful shape. Many people find that the other L cup offering from Bravissimo, the Alana, runs approximately one cup smaller than most of their other styles (meaning it only really goes to a K/KK), so I was very glad to find that the Floral Haze was more true to size. I did end up buying this style, though I haven’t worn it yet, and have since noticed from the picture that the band looks quite small. I plan to write a separate review of this style soon (including full measurements), but as a quick summary, this style is gorgeous and definitely one I would recommend (perhaps in your usual cup and one bandsize bigger). 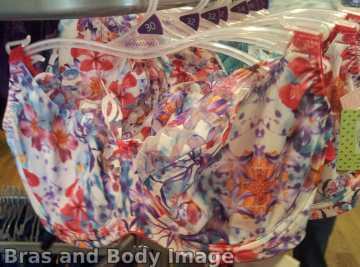 So, I left with three lovely bras, and when I was at the checkout, I also asked to order the Dotty Spot in Teal and the Panache Floris in the Bravissimo exclusive Floral Print (see right), as they weren’t available to try instore. Again, hopefully reviews will come soon!

Anyway, overall, while I adore the range of bras Bravissimo make and stock, I do have to say I was fairly disappointed with this fitting experience. It is possible that some of it was that perhaps some of these bras do run differently in smaller cups, and my fitter didn’t have as much experience with my size range or shape. Regardless, I was very put off that she left the straps of the bras I tried unsupportively loose (so as to make the cups fit better), and that she was repeatedly pulling the wires up onto my breasts, even when I told her they were painfully high.

I do not want it to sound as though I am attacking my fitter or Bravissimo, as these issues aside, my fitter seemed very nice, and I have had great fittings at other stores. No doubt they are still one of the best places to go in the UK, but it does go to show that bra fitting is complicated, and even the best of the best can get it wrong sometimes. If anything, I would just like to emphasise that it is just as important to listen to your body as it is to listen to your fitter, and if something feels uncomfortable, painful, or not right in any way, you shouldn’t feel you have to go along with it. Ultimately, the only person wearing your bras is you.

What do you think of these Bravissimo styles? How do you rate their fitting service? Let me know any thoughts in the comments!

16 thoughts on “An Afternoon at Bravissimo”