Masquerade (also known as Harlequin) was the luxury brand of the Panache family, providing slightly more sultry, sexy and sophisticated options in sizes 28-38 D-H. Masquerade has since been rebranded as Panache Black and the available styles have been completely changed, but many of the older Masquerade styles are still floating around if you look for them. Obviously, with my usual Panache size of 30JJ, I’m a fair way out of Masquerade’s size range, but I had to know what I was missing out on. So, I decided to try out a couple of pieces in a 34H. 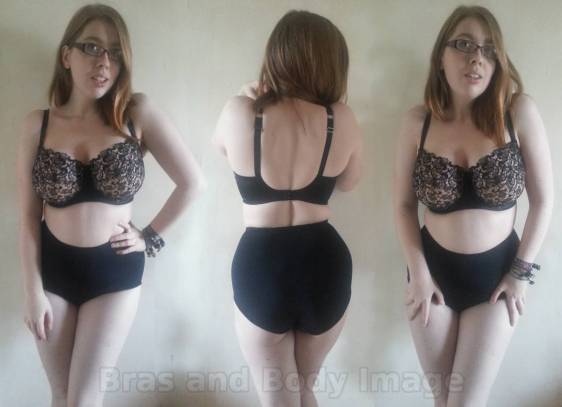 The first style I tried was the Masquerade Persia in Black, matched here with some high waisted briefs by Starline Lingerie. As the highest cup size available was an H, and Masquerade were often said to run firm in the band, I decided that a 34H (sister size to a 30J) might be my best shot for something wearable.

Appearance wise, this bra is absolutely stunning. It is an unpadded full-cup style, constructed with black embroidery over a beige mesh base, with black shine satin comprising the band and straps, and embroidered mesh adorning the front of the straps. The front half of the straps are constructed of the same shine satin fabric as the band, and the gore is adorned with a little tassel, which is a detail I love! 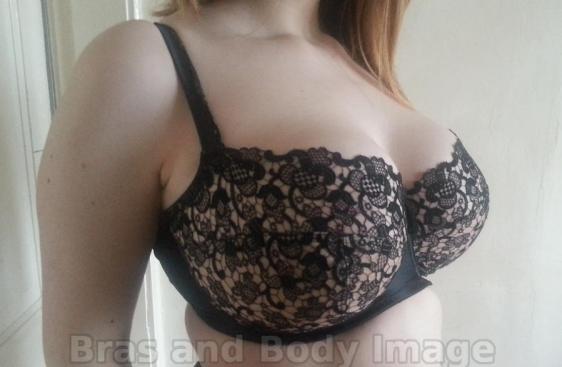 I did expect it to be too small in the cups, so there were no surprises when I found this was the case! This size is at least one cup small for me, which can be seen even with the straps worn looser than usual. There isn’t outright visible quadboob, and the gore is firm enough to sit flat on me, but the cup curves in to where it expects my breasts to end, and then is pushed back out again, resulting in the sort of in-cup bulging you can see above. 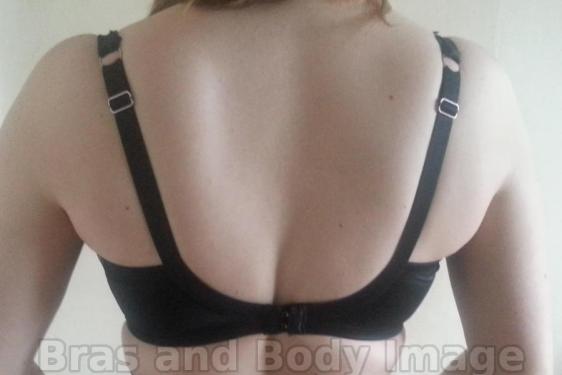 As expected, I have to wear this bra on the tightest hooks, but I did find the band is on the firm side for a 34 (closer to 33 inches stretched). This bra is less structural than my usual full-bust bras, featuring just 2 rows of hooks and eyes and half-adjustable straps. Obviously if you want this as an everyday bra you might not like these features, but if you are mainly considering this for its aesthetics, you might be a bit more of a fan. 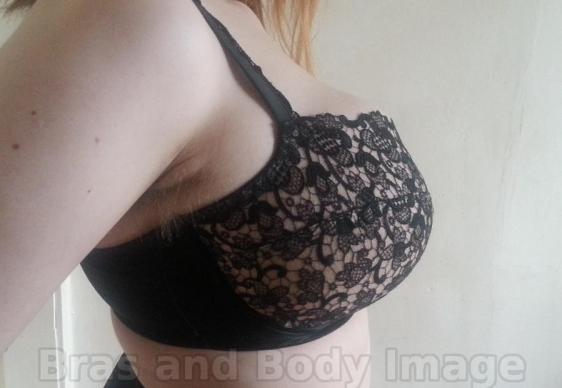 I believe the wires are average width, though they sit a little narrower on me due to the larger band and smaller cups. The wires are comparable to my 30JJ Panache Jasmine, so I’d say the wires are average-to-tall at the gore and sides and the gore is average-to-narrow. Despite the slightly taller wires, however, the neckline cuts straight across rather than reaching up towards the straps, so I find it to be quite low coverage. Once again in this photo you can see how the top curves in, as well as the immediate projection at the bottom. These things make me think this bra would work best for those who are full-on-bottom to even, as I think those with much upper fullness may find this bra fights against their breast shape. 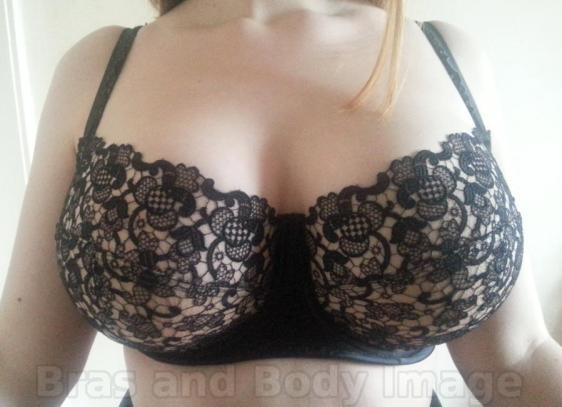 While obviously this style is far from a perfect fit for me, it is an absolutely stunning thing! I believe my usual Panache size of a 30JJ would be my best fit, but for days when I’m not feeling so particular about fit and just want to wear something gorgeous, the 34H definitely suffices.

The next bra I decided to try was the famed Masquerade Rhea in Black, again in a size 34H, which I have worn here with some knickers by Playful Promises. I’ll apologise now for the photo quality below – unfortunately when I photographed these pieces (quite a while ago now) I ran out of daylight, but hopefully you can still get a good idea of this bra! 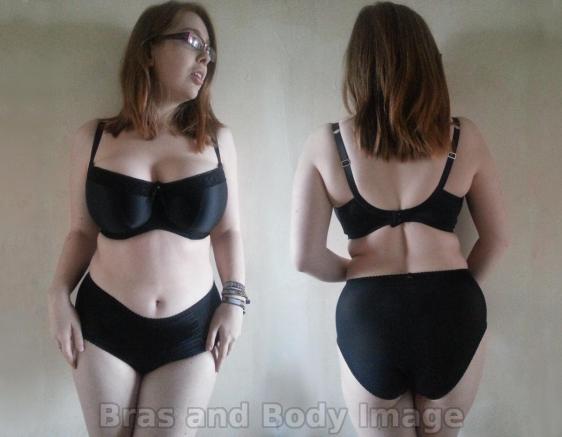 This is a padded vertically-seamed half-cup, described by Masquerade as a “bandeau”. Once again, this is a truly stunning style! This is constructed with a lovely shine satin fabric, with gorgeously sophisticated black lace trimming the cups and overlaying the band underneath. The front half of the straps are constructed of the same shine satin fabric, and the gore is adorned with a bow and small diamante. 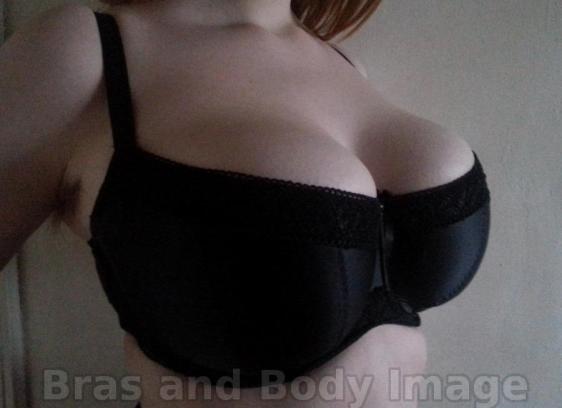 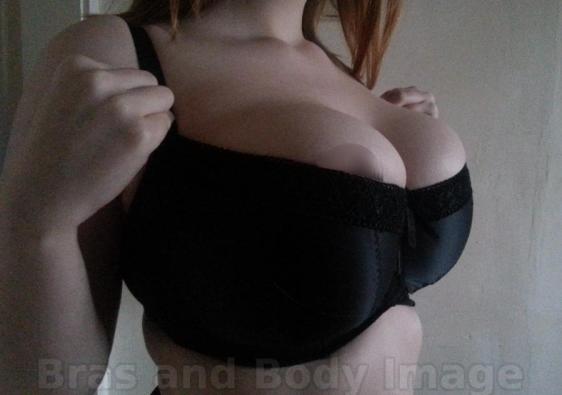 As expected, this style is once again too small in the cups, as can be much more easily seen when I put on my bra properly. As with my Curvy Kate ‘Thrill Me’s, it’s definitely not a bra I own for the fit, but I like it anyway for the appearance and suitability for low/squarer necklines. Once again I’d say my usual Panache size of 30JJ would likely be the best size for me in this style. This bra is much more open on top than the Persia, making it much more suitable for full-on-top breasts, as well as giving a little more leeway in sizing. I’d say the bottom has an average amount of projection, so it could likely work for most breast types, though I think it may not be suited to those with very firm, very bottom heavy breasts. 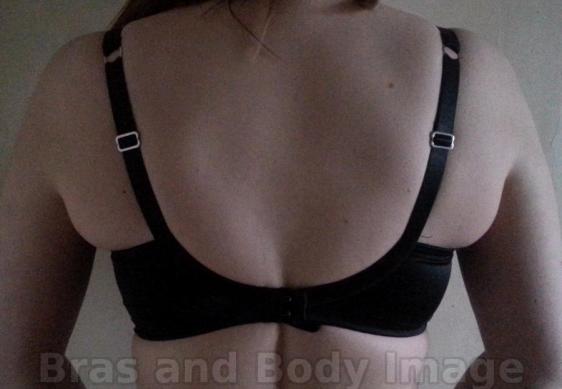 As with the Persia, the Rhea features two sets of hooks and eyes and half-adjustable straps, and I do have to wear this on the tightest hooks. I find this runs more true-to-size than the Persia, with the band stretching to about 34 inches. I should note that I’m not a huge fan of these bands – they are fairly rigid and unstretchy, and due to having two hooks they are quite thin. However, the fabrics are quite soft and comfortable, so I’d say this bra is somewhere in the middle in terms of comfort. 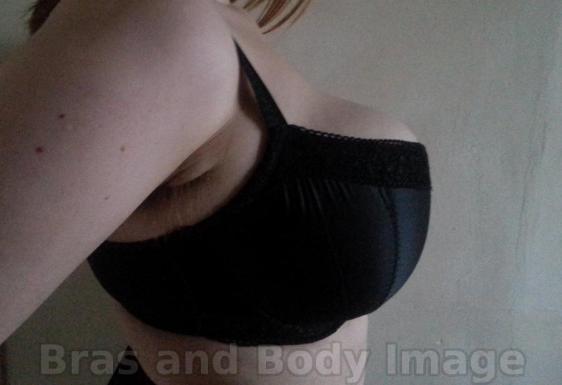 Here you can see the ultra-uplift this bra gives, with a fairly rounded, minimised shape. This bra became well known and well loved for the Marie Antoinette (two cakes on a plate) cleavage it gives, and I was pleased to find my experience was the same. I found the wires to be average-to-tall height at the gore, average height at the sides, and average width, so fairly similar to the Persia but with slightly shorter sides. This bra has shallow cups with average width wires, so most of the volume of this bra is vertical. I would think that if you have firm, deep breasts, you may find this bra to be incompatible with your shape. 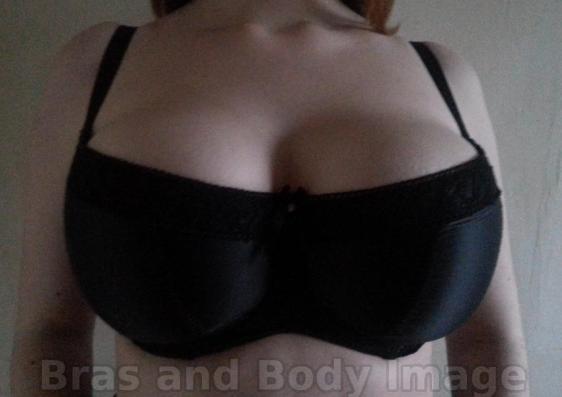 The looser band, the thin/rigid band and straps, and the open cups mean this definitely isn’t a supportive piece for me, but in terms of looks alone, I still love this bra. Despite the fit issues, it’s still an incredibly beautiful bra, and the minimised shape with low neckline mean it’s a handy piece to have in my bra arsenal (or should that be brarsenal?). These pieces have been discontinued, but many styles and sizes can still be found on My Curves & Me, Brastop and Belle Lingerie, as well as sites such as Amazon and eBay.

What do you think of these bras? Are you a fan of any Masquerade pieces? Do you think any should be reintroduced in the Panache Black range? Let me know any thoughts in the comments below!

Masquerade Persia bra provided for review by Panache Lingerie. Though this item was received free of charge, this is not a sponsored post, and all opinions are my own.

5 thoughts on “Mesmerised by Masquerade” 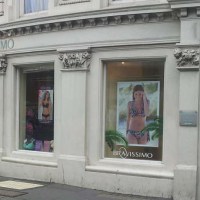